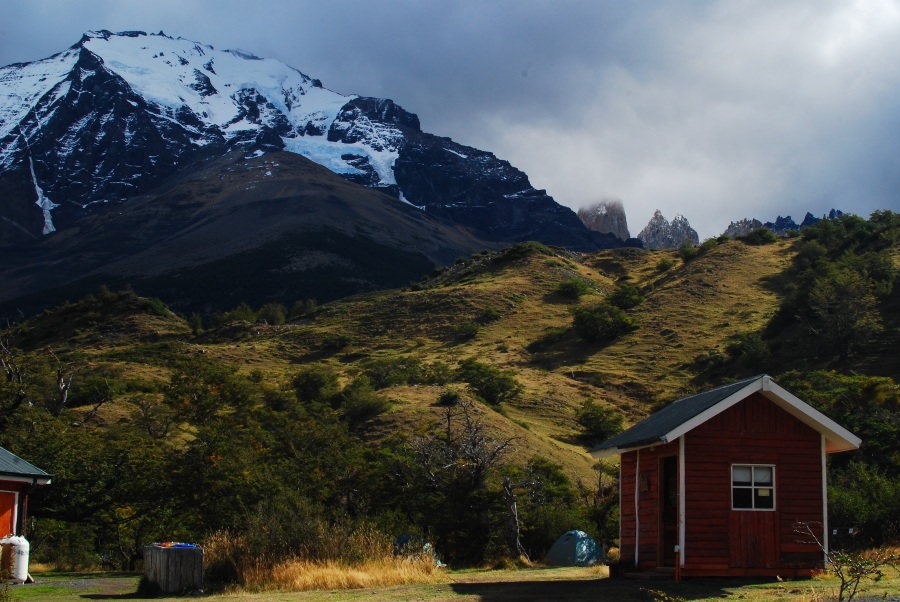 Patagonia is one of those rare places where you’ll turn a corner and your jaw will literally drop at the beauty of your surroundings. It’s also one of those places that reminds you just how awesomely powerful nature is. Looking back now, having traversed 4 continents, I can still say it’s the most breathtaking place we’ve been.

The trek we set off to do is called the W. It is a well-traversed trek through the mountains in Patagonia that gets it’s name from the “W” shaped route that you take in and out of the valleys that boarder the mountains. The scenery as I mentioned is stunning: towering snow-capped mountains, massive glaciers merging into aqua-colored lakes. With every corner we turned was a new view that any amount of Googled images could not have prepared us for.

The trek itself was equally amazing-challenging-rewarding, and everything inbetween. Over the 5 days we laughed, cried, swore, pushed ourselves harder than we ever had before, and washed down the whole experience with numerous boxes of Gato Wine. It’s nearly impossible to explain everything that this hike is while doing it justice. That said, I’ll do my best and hope that the photos fill in the gaps!

We chose to ease into it and stayed at the very first Refugio next to the bus stop on Day 1. Most people hop off the bus and immediately start walking, but we were happy with our decision to take the afternoon to chill out and take it all in (including catching a quick nap in the sun). It was a miraculously sunny, warm afternoon, and the good weather combined with the beautiful scenery and a good night sleep put us a great mood for an early start the next morning.

Again we woke up to bright sunshine and started out in high spirits. About 5 minutes in we encountered our first river. Following advice given by a guide, Rustin, at our Eratic Rock hostel talk to “just walk straight into the first river you see — your feet are gonna get wet and you’ll save a lot of time, energy, and potential injury of trying to tiptoe over slippery rocks”, Stef and I went for it.

Badass, right? Well…it turns out we may have in fact been just a tiny bit too zealous. As Nick discovered by walking just a few meters further,  there was a bridge. And actually the rest of the rivers that day were small enough to hop over easily. Lesson learned to maybe not take the advice of well-meaning guides quite so literally!

The rest of the day passed in a blur of stunning waterfall-covered mountains and steep climbs where the weather changed from warm summer sunshine to a near blizzard at the top. Because of the snow our visibility was limited and we couldn’t see the famous Torres del Paine, but we did snap some good photos at the icy blue lake at the top.

Rain and mud were the theme of the morning. Undeterred, we packed our things and set out. We climbed out of the first valley and, after a small detour for hot chocolate and a shirt left behind, continued our trek along side Lago Nordenskjold to Cuernos Camp.

The rain stuck with us the whole day; within the first half hour we were soaked from head to toe. Thankfully, we followed Rustin’s advice to put all of our spare clothes in double plastic bags within our packs to keep them dry. Faith in Rustin, renewed!

We also encountered some serious wind, and were hugely greatful to our friends for letting us crash in their cabana so we wouldn’t have to face a night of gale-force winds in a tent. We ended the day completely exhausted, but feeling cheered by 2 boxes of wine, a warm fire, and the clearest star-filled night sky.

Day 4:  Refugio Paine Grande Patagonia rewarded our efforts with a rainbow-filled morning. We happily brought out the cameras for photos, excited for the day ahead…until Kyle pointed out that rainbows are caused by rain and these ones were directly in our path for the day. Begrudgingly, we left our cozy cabin and set off. Within the first couple kilometers we were met with our first downpour — from the lake. Another warning proved true: the winds are so strong up in the mountains that they will actualy pick water up from the lakes and throw it on you while you’re hiking on the mountain. Under sunny skies we were struggling to stay upright in hurricane force winds while being drenched with lake water. It was like a waterpark ride gone horribly wrong in the most spectacularly beautiful place on earth.

From here, the day intensified as we headed into the French Valley, known for it’s steep climbs, unpredictable weather and, of course, amazing scenery. Shortly before we entered the valley the rain came back at a steady stream. Determined, we continued on. After a rather trecherous climb we made it to the first lookout point where we saw…nothing! The rain and wind were so bad we could barely stand upright. We snapped a quick selfie to commemorate our accomplishment before scrambling down the rock faces that had become waterfalls. We later learned that we were the last ones allowed into the valley that day. Shortly after we set off they closed the trail due to the winds and rain. We weren’t imagining it — the weather really was that bad!

By the time we reached the entrance to the valley we were soaked and freezing. My fingers and toes had long ago gone numb, and we were incredibly thankful to the few guys working at the camp who let us warm up in their one-room cabin. Too soon it was time to set off, and we began the final stretch to Paine Grande. This was collectively our lowest moment as we trudged through knee-deep mud barely talking except for the odd swear word yelled angrily when we hit a particularly deep or slipery step. Through shear tenacity we made it and were very greatful for a hot shower and our first indoor bed in the refugio dorms.

We were relieved to find that the rain cleared in the morning and we had relatively good weather for our final stage, and shortest day. Proud of ourselves for having made it this far, the site of our very first glacier fuelled our good moods. We snapped photos on the way and made it to our final refugio without any major mishaps. Maybe we were just on a high from our accomplishments, but everything about this place was perfect. The refugio felt like a cozy mountain retreat, complete with the wrap-around porch for watching the resident hawks. We were so happy that we had booked a second night here so that we could spend a full day enjoying Patagonia, backpack-free.

For more photo’s check out the W gallery!

Oh, the places we’ve been…